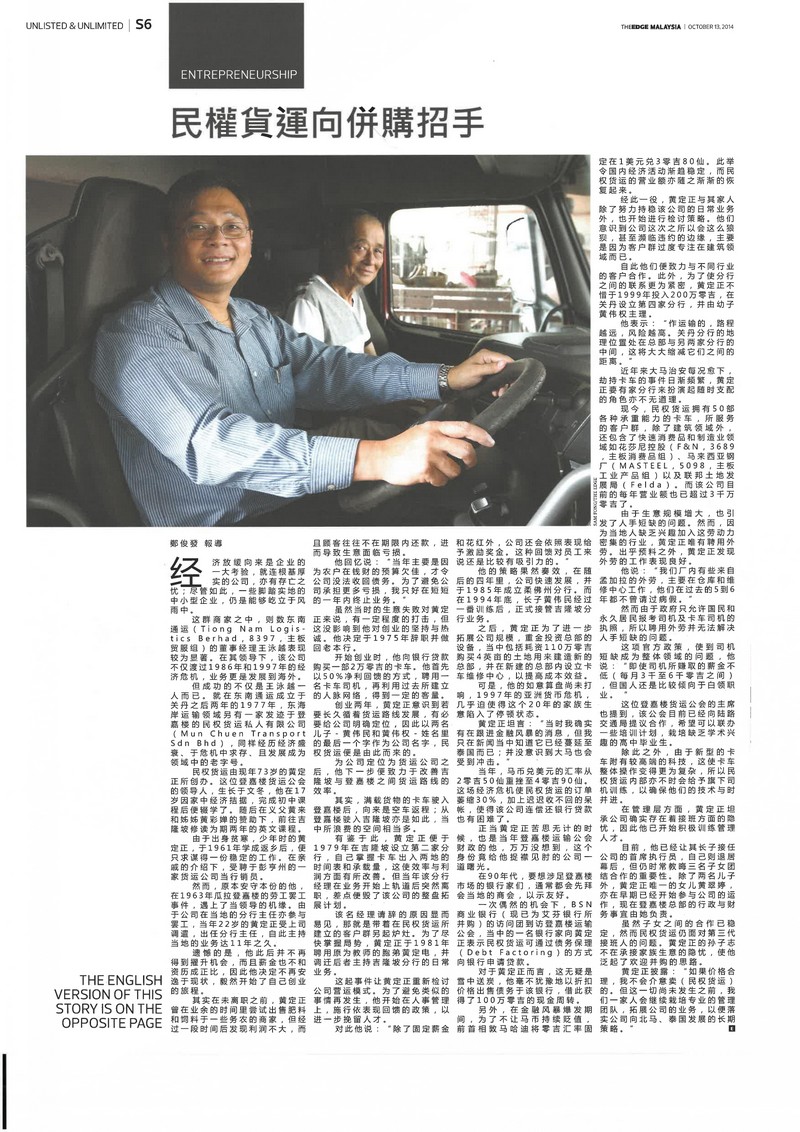 MUN CHUEN TRANSPORT Sdn Bhd is 37 years old. Founded in 1977 by Wong Thin Ching, the company has not only weathered some major storms but also grown from strength to strength.

Wong grew up under impoverished circumstances in Bentong, Selangor. He dropped out of school at the age of 17 after completing his Form Three exams because the family could no longer afford to pay for his education.

However, his godfather, Wong Loy, and elder sister, Wong Choy Sim, helped pay for a two-year English language course in Kuala Lumpur. That was the extent of his formal education.

Wong did not start out as an entrepreneur. All he wanted was a stable job. Therefore, after completing his course, he settled for a job as a salesman with a transport company in Pahang. At 22, he was transferred to Terengganu to replace the supervisor of the company’s Kuala Terengganu branch who had participated in a workers’ strike. So, for the next 11 years, Wong oversaw the day-to-day operations of that branch.

But although he worked hard, Wong did not feel that his remuneration grew in tandem with his capabilities. He decided to try his hand at running his own business after work.

The results were not encouraging. Wong sold fertiliser and fodder to agriculture companies, but the margins were low and soon, he found he was running at a loss because his customers were defaulting on payments.

“I think the root cause was the farmers back then generally didn’t budget carefully,” he recalls. “So, I ended that business in less than a year to stop further losses.”

Although this was hardly a promising start, Wong still wanted to have his own business.

He quit his job in 1975 and bought a six-wheel lorry for RM20,000 on hire purchase. Since he had been working in a transport company from the time he started out, this was the business he was most familiar with. He employed a driver who agreed to split whatever profits they made equally.

This time, his business, T C Wong Trading, flourished. Wong leveraged the contacts he had built in the past decade. Two years later, he decided to focus on the transport sector and changed his company’s name to Mun Chuen Transport.

Once he had settled on this industry, Wong made one of his first innovations. Back in the late 1980s, he noticed that lorries travelling from Terengganu to Kuala Lumpur with a full load often returned empty and vice versa. This had always bothered him because it was a waste of space and fuel.

So, Wong set up the second branch office in KL in 1979. In this way, he was able to gain control of the lorries’ schedules and loads and ensure that they did not travel long distances without a load. With the increased efficiency as a result of his strategic planning, profitability started to rise.

Then, his branch manager walked out, taking most of his customer contacts with him, which nearly ruined the business. Wong acted fast to rectify the situation. He sent his younger brother, Tin Tuan, who had been a teacher, to take charge of the KL office in 1981.

Although he had averted a disaster, Wong tried to figure out why this had happened in the first place. Had his manager been unhappy with what he was being paid?

Wong worked hard to come up with a remuneration model to prevent such an incident from recurring. “Besides their fixed salaries and contractual bonuses, I also gave my staff a performance incentive whenever a target was achieved. And this reward was attractive enough to get them to stay.”

From this point, the business started to grow rapidly. In 1985, Mun Chuen Transport set up its third branch office — this time in Johor — and nine years later, Wong handed over the reins of the KL office to his eldest son, Wai Mun.

Wong was always looking to expand. And towards this end, he forked out RM1.1 million for a four-acre tract in Kuala Terengganu to house his new headquarters, a lorry maintenance centre and a place to park his fleet of vehicles.

Business was good and it seemed like the company would continue to grow for years to come. And then, the 1997 Asian financial crisis hit. “I read the stories when it hit Thailand, but I never thought it was going to affect us.”

It was a common misperception at the time. But hot on the heels of the baht devaluation, the ringgit plunged from RM2.50 to RM4.90 against the US dollar, almost half its former value. Malaysian companies reeled from the blow. Mun Chuen found that more and more of its clients were unable to pay their bills. The company’s accounts receivables (that is, money owed to the company by its customers) may have looked healthy but as no one was paying up, cash became so tight it was having difficulty servicing its loans.

Mun Chuen was saved by a facility that allowed it to discount its receivables and sell them to BSN Commercial Bank for RM1 million. Wong, who was the treasurer of the Terengganu Freight Association had learnt about this when BSN Commercial Bank (which later merged with Affin Bank) paid the association a visit to explain its products and how the companies could make use of them.

Naturally, a company would only make use of this facility when it was desperate because it would mean a reduction in revenue. But at the time, any form of liquidity was preferable to high receivables that threatened to turn into bad debt.

At least, this was the case for Mun Chuen. The orders started trickling back in.

After any crisis in the company, Wong always took stock to identify weaknesses and take appropriate action to see that they did not happen again. When the company first nearly went under, he concentrated on improving its remuneration policy and incentivising the staff. This time, he realised that the weakness was the company’s high reliance on one sector: construction.

He started looking at how to diversify Mun Chuen’s customer base. At the same time, having survived the financial crisis intact, he resumed his expansion plans. He opened his fourth branch, this time in Kuantan.

“In the transport industry, it is commonly known that the longer the journey, the higher the risk. The Kuantan branch, which is located at the mid-point of the routes, allows our drivers to break their journey along the way,” Wong says.

This is because most of journeys are concentrated in the central and northern regions as the Johor branch accounts for the lowest revenue in the group.

The Kuantan branch has been run by his youngest son, Wai Chuen, since it was established in 1999. The company invested RM2 million in this, and as reports of lorry hijackings increased, Wong was vindicated for his foresight in reducing the length of the trips, thereby reducing the risk.

Today, Mun Chuen has grown to a respectable size. It owns a fleet of 50 lorries of various sizes and serves a diversified customer base that ranges from construction to fast-moving consumer goods companies, such as Felda, Malaysia Steel Works (KL) Bhd and Fraser & Neave Holdings Bhd. It generates healthy revenue of about RM30 million annually.

But this does not mean that everything is running smoothly. For instance, Wong, who is president of the Terengganu Lorry Operators Association, is busy tackling industry-wide issues such as the shortage of lorry drivers. Although he has been able to employ foreigners to help out in the warehouses and maintenance centre, he is forced to hire only Malaysians as lorry drivers.

But fewer and fewer locals want to drive lorries despite the relatively high salaries of between RM3,000 and RM6,000 a month.

The association has come up with various suggestions on how to tackle this problem. For instance, it proposed that the Road Transport Department organise training programmes for secondary school leavers who either do not have the aptitude or are uninterested in going on to university. These programmes would expose them to the experience so they can see what it takes to be a driver. They would start out as assistants and only become fully qualified lorry driver once they turn 21.

His son, Wai Mun, took over as CEO this year and although all three of his children are involved in running the company (his daughter, Chui Teng, handles finance and administration in the head office), there is an issue with succession. The third generation, which consists of only one grandson, is not interested.

So, Wong is open to outside offers. “If the price is right, I don’t mind selling,” the 73-year-old founder says.

In the meantime, things are by no means done. Wai Mun is looking to move into new markets and he also plans to professionalise the management to deal with the succession issue. That way, even if the family members withdraw or retire, the company will continue to thrive. 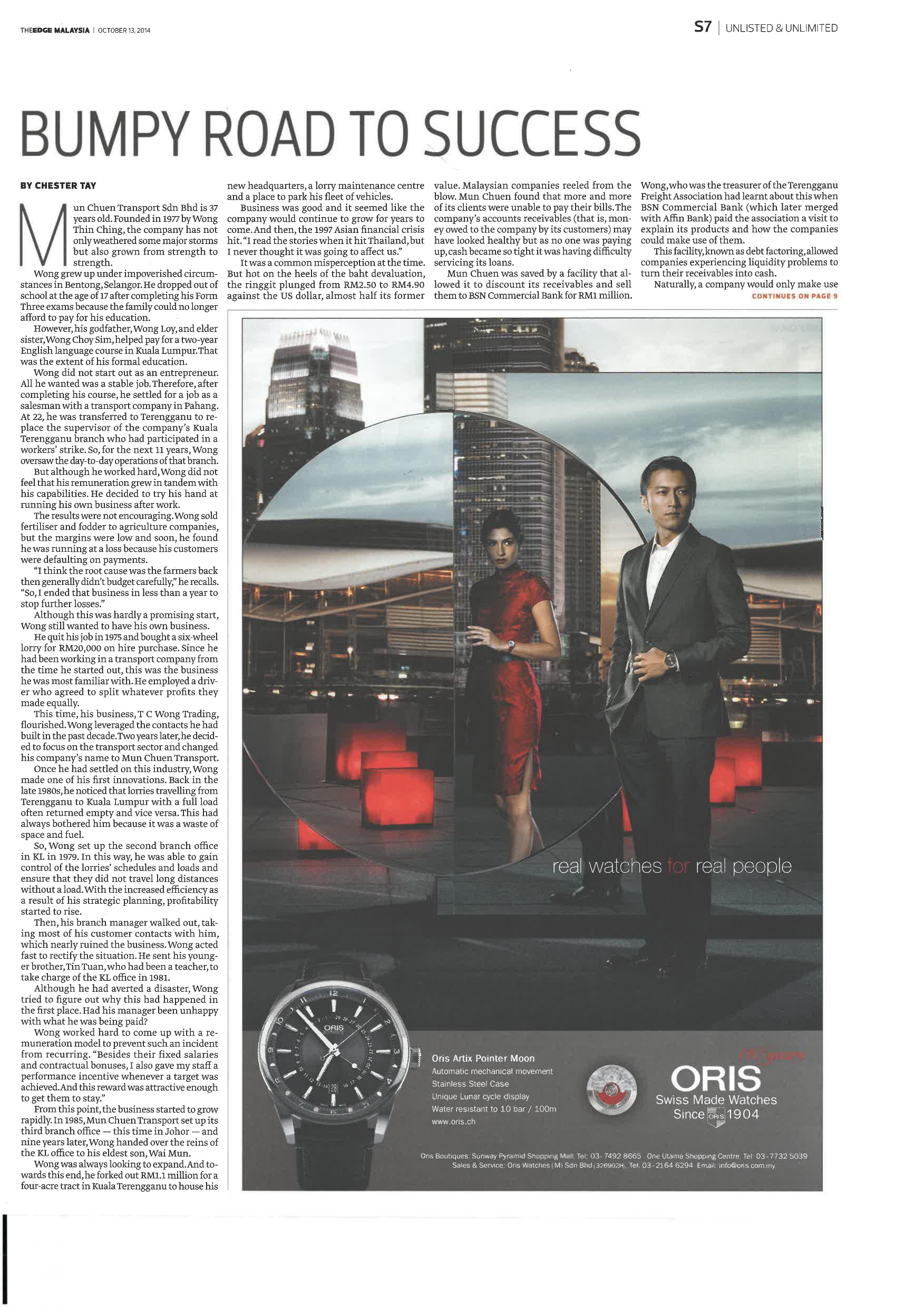 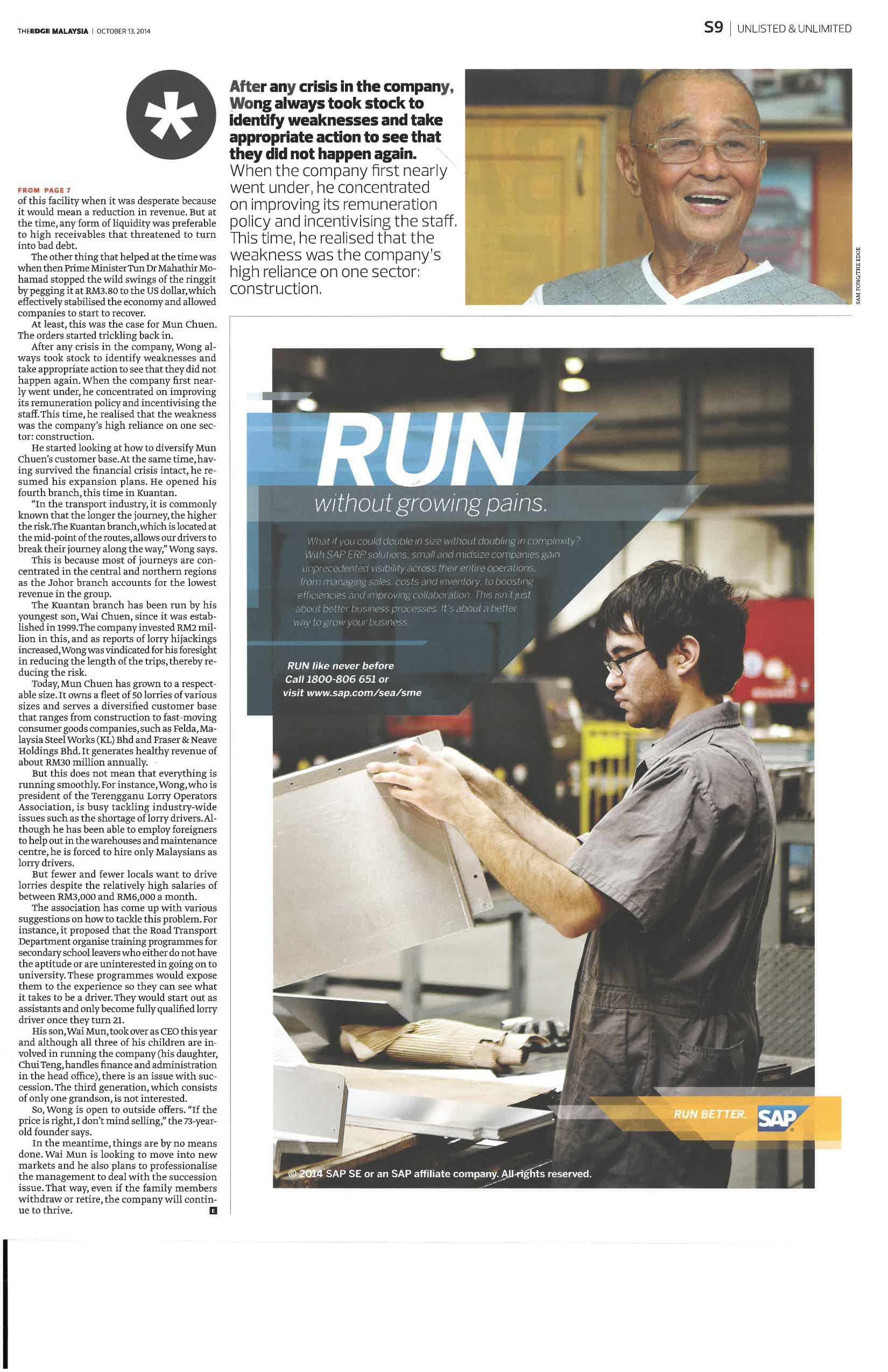